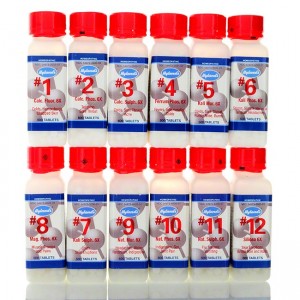 What are Cell Salts??

Cell salts are homeopathic preparations of certain mineral compounds, which are found within all living things.

Developed over a century ago by Dr. William Schuessler, a German doctor and homeopath. He found, when investigating human blood and ashes after death, and isolating minerals from these various tissues; that certain minerals were a vital part of every cell in the body. He discovered 12 mineral compounds that were important to proper functioning of the cells. He called these 12 salts, cell salts or tissue salts.

Schuessler found that diseases and abnormal states in the cell, and therefore the body, arise because of deficiencies of these 12 mineral salts. By supplying the body with the correct combination of minerals, wholeness and balance were restored; and the body healed itself. Tissue salts simply provide the needed elements to the human body in a form that is readily assimilated, allowing speedy restoration, balance and harmony to the system. Tissue salts, are to the body what a really rich fertilized soil is to a plant. Blood is to the human body, what soil is to a plant. Poor exhausted soil means weak, sickly plants. In the same way, poor blood, lacking certain minerals means bodies prone to disease. Restore the blood and the body will flourish.

Cell salts are an extremely versatile natural healing modality, especially since the salts are available over the counter at any health food store. They are inexpensive, last a long time and, due to their low potency at a dilution of 6X they are inherently safe for home prescribing; for adults, children, babies and pets.

They act a little differently from a homeopathic remedy, which repels a like vibrational illness in the body; instead the cell salts actually reinforce their corresponding field. Made in a 6x potency, they strengthen and nourish at a cellular level.

Cell salts work by enabling the cells to better assimilate and utilize the mineral compounds they represent in homeopathic potency.

The cell salt can be used on its own to replace a lost or needed mineral, but it could also be used to utilize or assimilate nutrients from diet or supplementation. In the case of a broken bone for example, the crude form of calcium is often prescribed. But this form of calcium often doesn’t go into the bones…where you want it to go, as recent research is showing. Instead, it may build up in the body where it is unwanted, in arteries, veins, and organs, leading to unwanted plaque and build up.  However, the tissue salt calc phos could be taken, which would first help supply a source of calcium in a safe way, AND secondly it would help the body assimilate and use the calcium taken in through foods high in calcium, such as green leafy vegetables.  If extra calcium is needed, a smaller amount would be sufficient, as the body better assimilates it.

When I broke my fibula, doing my favourite sport, … I took 3 calc phos 4-5 times daily, along with ferrum phos to help with the inflammation, arnica a homeopathic to help with the trauma, and symphytum a homeopathic remedy to help heal the break. I took a small amount of crude calcium/ magnesium with boron but only every 3-5 days, the bone healed in record time.

Dosage is different depending on the condition.

If it is an acute, (which is a condition that appears suddenly and lasts only a short period of time), for example a cold or flu, I suggest dosing often.  Combine the cell salts, taking a few of each…. often at first, even every 10-15 minutes for a few doses until one starts to feel better. Then continuing to take, but spread out further and further until no symptoms remain.

So for example you could combine calc phos and ferrum phos, taking 3 of each every 10 minutes, at the first sign of a cold, for 3-4 doses. As you notice the symptoms subside you could reduce, taking them to every 2-3 hours and then, once or twice a day for a day or two, until all symptoms are completely gone.  There are no side affects, they are safe, and one cannot over dose.

With chronic conditions, such as arthritis, asthma, or diabetes, therefore cases where you have had the condition for a period of time, the condition is often deeper and more complex, so it takes time to turn it around. I suggest taking the cell salt, 3 of the one needed, or in a combination of salts 2-3 times a day, for a period of 3 months or more. It often takes three months to see change in a chronic condition, in this case it is important to be consistent and have patience.

Children and adults respond to them beautifully in acutes such as fevers, colds and flus …almost immediately, especially if it is caught in the early stages.

It is important to keep in mind that its best to start early, and be continually addressing what the body presents as symptomatic, as it is far easier to turn a small boat a small degree, than a huge ship a large degree. Having said that, the body has an enormous ability to heal, given the right nutrients, with consistency.

It is also important to keep in mind that sometimes pathology is deeper than the physical; it may be mental or emotional. I will share some of the ways that the mental emotional can be healed with tissue salts, but sometimes a deep acting homeopathic is needed as well. In chronic disease it would help speed recovery.

We are complex beings, and it is important to take a holistic approach, everyone is different. Some illnesses have just appeared, others have existed for years, and are more complex…. needing pathways to be cleansed of toxins, meds and heavy metals first. Then nurturing with nutrition, healing on an emotional level, AND feeding at a cellular level with tissue salts. Prevention and nurturing on a continual bases, would be ideal.