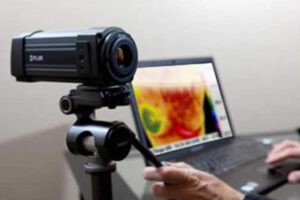 One of the best tools for spotting inflammation is thermography (infra-red imaging).  It is well documented that inflammation is a precursor to many diseases.  As well as detecting inflammation, thermography is extremely useful for pinpointing neurological, vascular and circulatory dysfunction, and revealing injury to muscles and bones.  Breast Thermography can also give a better view of anatomical changes within dense breast tissue – changes nearly impossible to view on a mammogram.

Normal thermographic images show symmetry: the same temperature on both sides of the body (or breasts).  Differences in temperatures can indicate something is wrong.  That ability to compare in such detail is key to (breast) cancer prevention.

Thermography is non-invasive, no pain (no squeezing) and because it has no radiation it can be safely used at any age.  And is safe to use with eg. Breast implants.

A thermal scan of other parts of the body can indicate other health problems in their very early stages – before many conventional approaches can.   Thermal imaging of the joints for example,  may demonstrate early signs of arthritis that can be addressed sooner rather than later, preventing further degeneration.

Do you have pains and your doctors can’t see it?  Thermography will give you pictures of your pain / inflammation.   A thermographic picture is truly worth a 1000 words.